It was an early morning start for 12 players, from the Warrington Wolves under 16’s scholarship squad, as they arrived at Wilderspool at 6.15 am. for a training day. The players had travelled from as far away as Barrow, Blackpool, Skelmersdale and Wigan to take part, all arriving on time. 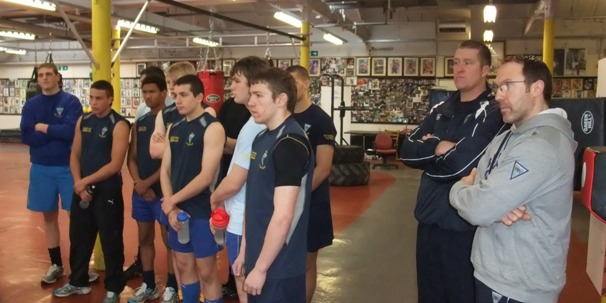 Under the guidance of John Bastian, John Thursfield and Peter Farrell they started the day with an hour long weights routine in the gym at Wilderspool. The players put in that much effort a radiator fell off the wall and caused a flood in the gym.

A cooked breakfast was enjoyed by all before boarding a minibus which took them to Roundhay Park in Leeds. John Thursfield and John Bastian had devised an endurance exercise which involved racing up a long step hill in groups of four, walking back down to the bottom and then running back up again.  Four runs up the hill were attempted and it was certainly found to be very demanding the final run leaving some of the group feeling quite sick and with tingling legs.  Congratulations to Rhys Evans on winning the final race.

A drink and few sandwiches on the minibus soon refreshed the tired legs and cheered up the party as we crossed Leeds to the Burmantoft Amateur Boxing Club.

James Hughes, Burmantoft’s Technical Skills Coach gave a talk on the similarities between boxing and rugby league and then used the equipment in the club to undertake a series of exercises mainly using the many punchbags available. For the last exercise James Hughes & John Thursfield donned boxing training body armour. The players had the chance to get their revenge on James or John by jumping into the ring one at time to try punching the trainers whilst James or John tried to stop them by wrestling.

After a shower and a sauna it was into the minibus again for a trip to a Chinese Restaurant for lunch. Lunch was followed by a session of ten pin bowling.

The party returned to Wilderspool at 6.30pm. The day was a great success and gave the players a chance to test themselves against one another and to get to know each other and build team spirit.

The day was sponsored by Squadbuilder; we would like to thank all the Squadbuilder members for their continuing support.

It was a privilege to take part in this trip to see the work carried out by the coaches in the continuing development of young players.